For twenty years, since 1996, cars have used computers to control different parts of the car.

You might wonder, why computers in cars? Computers are more reliable and use fewer wires than mechanical equivalents.

The computers, however, are not desktop, laptop, tablet, or phone computers we’re used to. They’re micro computers more like a Raspberry Pi, a set of chips with software loaded into memory. Each computer talks to other computers connected together into a network.

Several network types are used in cars based on what they control. For example, important controls like the dashboard, navigation, and engine use a Computer Area Network (CAN) with messages passed back and forth. Each computer in a CAN is able to process messages. Controls like turn signals don’t require complicated robust networks like CAN. They use a Local Interconnect Network (LIN) which has a master computer connected to subordinate computers, called slaves. There are other networks in cars, for example, a network to manage safety devices and newer types like FlexRay.

Which computers and networks exist in a car depends on the auto manufacturer and age of the car. Today the 18-80 computers found in cars are connected with cables. In the future, most likely wireless networks will be used.

Anybody can see the data their car generates, in real time, using a plug that connects to your car and broadcasts diagnostic data to an app on your phone or tablet. These plugs range in price from $15 to $100 USD. The more expensive plugs include better security transmitting data to your app, faster response rates, and in some cases, more data. The low cost plugs use a common ELM327 chipset with basic functionality.

This diagram from the print magazine shows some of the key controls and networks found in automobiles. 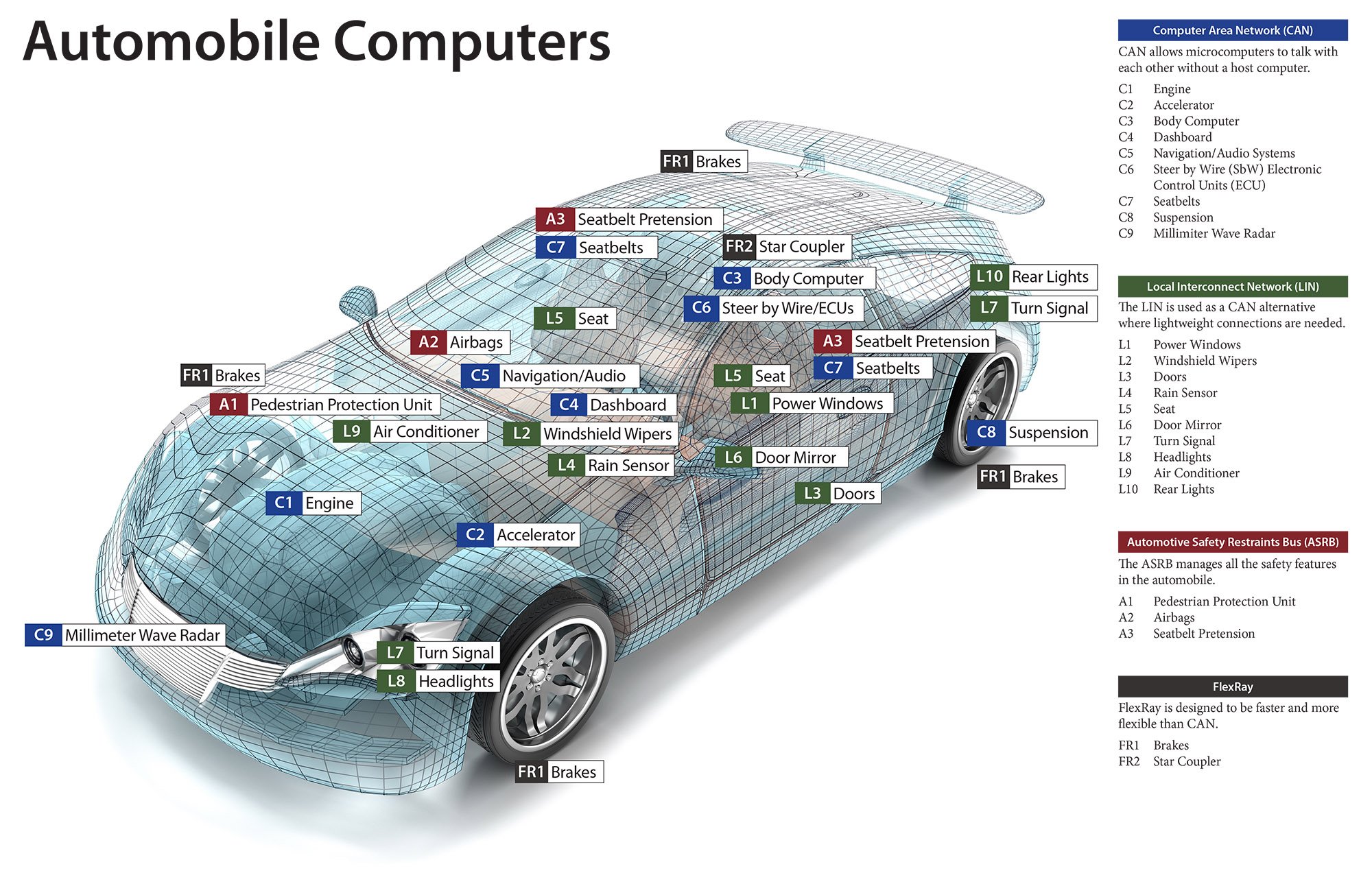 On Board Diagnostics (OBD)

The Computer Area Network (CAN) Bus

Use your iPhone to Scan Vehicle Codes And Read Sensor Data

Car Hacking Tools of the Trade

The title is overly dramatic but this book excerpt explores different options for seeing message traffic and sensor data in your car. Lots of useful context.
http://makezine.com/2016/04/08/car-hacking-tools-trade/
https://www.nostarch.com/carhacking

Also In The February 2019 Issue

The craft world and the tech world collide in this fun, hands-on activity.

A simple coding activity to create triangles in all shapes and sizes.

For twenty three years, since 1996, cars have used computers to control different parts of the car.

Celebrate Lunar New Year with your own custom-built lantern, complete with LEDs and micro:bit!

Synchronizing games with players from all around the world is no easy task.

A simple thought experiment sheds light on the dangers of AI. Can we stop the earth being buried in paperclips?

What do students really learn from robotics class? And how can we make it better?

Learn how rockets may soon be able to refuel in 0G. Next stop: Mars!

‘Files’ may be easy concepts for humans, but not for computers. What’s going on inside your operating system?

Two ways to play Minecraft with an overarching storyline. Experience the game like never before!

Helping kids fall in love with coding through Minecraft mods and Raspberry Pis.

A better, smoother way to direct your theatrical masterpiece.

Explore the past of cellular phone technology, and take a peek into its future.

How hackers can steal the messages you send over the internet, and how to tell if your communications are secure.

Add multimedia & more to your fantasy computer game to make it cooler than ever.

It’s not as simple as it seems. Can you solve this classic programming problem?

Ever wondered what happens when you connect to a website? Time to dive into the secrets of networking!

Links from the bottom of all the February 2019 articles, collected in one place for you to print, share, or bookmark.

Interesting stories about science and technology for February 2019.